Before going in detail, we must accept the fact that UEFI environment is created to replace the good old BIOS interface. Though BIOS is in a de facto situation now, still both of the firmware is working with grace as before. About the new system, it is not a type of BIOS, but more than that, including almost all the old features from its predecessor.

Therefore, the recommendation goes always with the modern UEFI setup. But, being the experimental child of modern demands, it is still facing its own issues too. Though, being in the toddler age, its every upgradation comes with the solutions of the previous concern to make it a wholesome for all users. Its proper implementation has started from the Windows 10 version 1709. Since then, the new models launch with the default UEFI mode.

Here, I must smash out the biggest confusion lurking around this matter. UEFI is not a brainchild of Microsoft, it never was. The ancestor was EFI, originated by Intel. And UEFI is controlled by the UEFI Forum, where Microsoft shares a member’s seat together with all the major PC manufacturers including Red Hat, Apple, and so and so.

Now, let us consider the case of the Dual-booting, that is when we use different OSs in one single machine. In that case, you should surely go through the following topic to make the right choice. Because, it is advisable to install the OSs in the same boot mode. Otherwise, you can skip the effort, and better go for the next one.
Note: In dual booting, each OS is installed on an individual partition inside the main hard drive.

Again, if you want to understand the firmware from the beginning of its time, you can go through the reference of the paper A Tale of Two Standards and the UEFI specifications in the UEFI official site.

Here, we will be focusing on the present day differences between both the environment based on their boot process. When we turn on the device, the central processor executes startup code located in the ROM.

Note: Network booting is available in both BIOS and UEFI.

To overcome these issues, first came the EFI firmware system. UEFI is the second version of this firmware, which came with the models after 2010.

This system is able to

Note: If you want to know the firmware build of your machine, the precise way is to go through the motherboard manual.

Now, after UEFI implementation, a new boot mode was born:

Here started the confusion. OS installed in BIOS mode can’t be booted using UEFI mode unless we modify or reinstall the whole system, and vice-versa. This is the reason UEFI now supports the Legacy Mode.

Legacy Mode is the process of operating UEFI similar to a BIOS. Hence, it is also called as Legacy BIOS mode, provided by Compatibility Support Module (CSM) inside the UEFI implementation.

Note: It is advisable not to mix both Legacy and UEFI mode in the same computer, and definitely not on the same disk. What you decide, it’s up to you, but use only one of them consistently.

This method does not include a lot of benefits of the UEFI, namely the Secure Boot and the Fast Boot. Though the graphical user interface remains here too.

The main difference here is that the UEFI is bootable from MBR disks, and hence, compatible with non-UEFI installations.

But, there are other things that we need to consider here.

In Legacy mode, we can have only 4 Primary Partitions, whereas the number is 128 in case of UEFI native mode.

Also, in UEFI based machines, we can load more than 2 OSs in the single system, whereas the Legacy mode can work well for 2 OS only.

The speed difference mainly occurs in the customization options and, in the hardware initialization system at the early stage of the process. In this way, cache and hibernation files help in booting faster than the BIOS mode. But, the process is so fast like lightning speed, that it’s almost impossible to notice the POST screen also. Though we can’t properly understand the speed difference, it does make a distinction in performance at the statistical level. 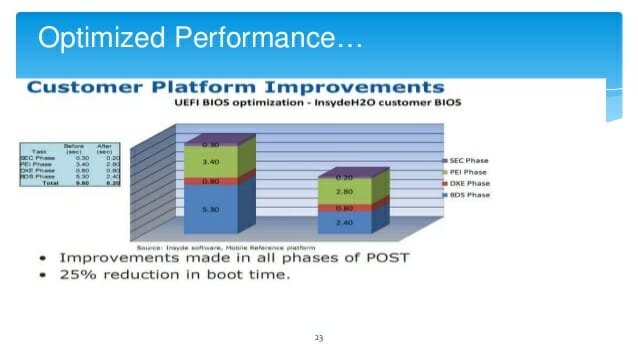 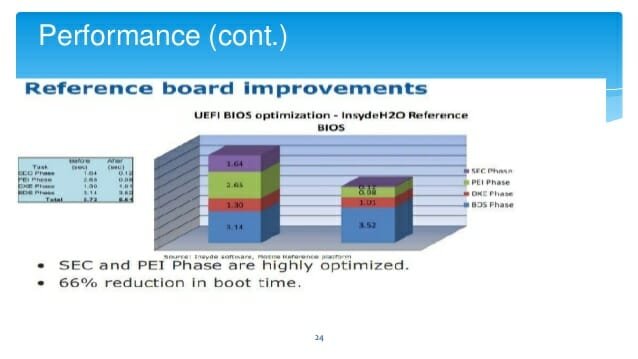 The Legacy mode coding uses assembler, whereas UEFI uses C/C++ language. Also, the old assembler language can be more confusing with its long line of codes. Also, in the BIOS compatible mode, a hardware upgrade is the necessity for system updates. Hence, it requires more complicated and numerous lines of code to complete the process.

Again, EFI format provides a user-friendly and object-oriented interface, which is not available in the BIOS mode.

Here is something to add: According to the Windows OS update models, Windows 10 LCU (Latest Cumulative Update) packages (only update model) are more beneficial than the legacy OS update models. Before that, the different types (cumulative as monthly rollup and security-only) of update models were creating a lot of confusions and issues through worldwide users. Hence, Windows 7 and 8 Legacy OSs were moved to a cumulative model in 2016, and Windows Server 2008 SP2 in October 2018. Though they still have other options too, switching in different models is not recommended. These models work differently than the cumulative update models in Windows 10.

How to Update Windows 10 Offline.(Without Internet)

Task Manager Not Opening in Windows 10? Here is how you solve it. 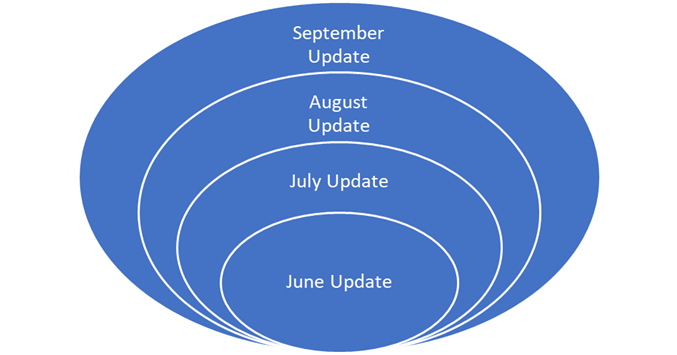 Since, Microsoft is going to end supporting Legacy OSs like Windows 7 SP1 and Windows Server 2008 R2 variants after January 14, 2020 (after 10 years cycle), they are focused on providing best assistance on the modern workplace and to defragment the whole Windows environment.

I hope, you are now able to grasp a little bit on both the world of firmware environments. But, before making a decision, why don’t you go through the next topic to have a detail work process on them?

Go to the next topic Common BIOS Settings in Windows 10.