Samsung Note 5 and BlackBerry Priv – high end flagships from Korean giant Samsung and Canadian company BlackBerry came out this year. While Note 5 came as an updated successor in the popular Note series by Samsung with high end specs, Priv is the first ever Android Phone by BlackBerry which gathered hype in the market. Both devices are flagships from the respective companies which means what the best they could deliver. Clearly without a doubt, both devices are high-end devices in terms of specs and price. If you are planning to buy one between the two, this post will help you through . 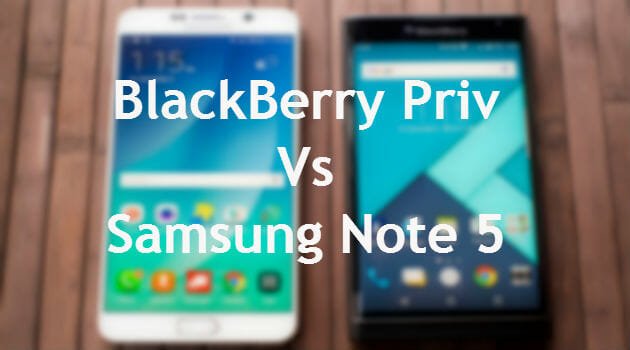 Let’s take a look at specs on paper first:

Design:
If you take a look at both devices – Note 5 is a shiny premium looking metal made with glassy back having curved edges on four sides. The phone might slip a bit from hand and attracts fingerprints very easily. To avoid this pain, you have to go for a back cover or a skin.

Priv is made of plastic body all over, designed well though. This soft-touch body gave a nice look to the device, and a good grip while holding it. You might already know this- This device came with a sliding capacitive keyboard.

BlackBerry Priv got equipped with a rocking Qualcomm Snapdragon 808 hexa-core chip with Adreno 418GPU. This device comes with 3GB of RAM and 32GB storage which can be expandable using SD Card.
Samsung Note 5 has Exynos 7420 octa-core chip with Mali T760MP8 GPU. It has 4GB RAM and comes with two storage variants: 32GB/64GB. The storage cannot be expandable as there is no SD Card slot.

Both devices have high-end processing power to handle heavy usage without any hitch. Multi tasking, Gaming etc can be done very easily using these two devices. You may not find difference between 3GB and 4GB of RAM at all while using, but non-expandable storage for Note 5 could be a down side you might want to consider.

If you consider software experience, Note 5 is a Samsung device having its own Touchwiz customization. You will find its own icons, customization, themes, graphical effects etc on this device. In addition to that, you would find features which are exclusive for Note series with a stylus – S health, S Note and S voice etc.

On the other hand, BlackBerry tried to give stock Android experience which you would find on nexus devices to the users. However, it has exclusive features such as BlackBerry Hub, Calendar, Security mechanisms etc on Priv. You can find detailed info regarding features in Priv in this post.

Note 5 has 16MP (f1.9 aperture) phase detect auto focus camera with LED flash on the back with features such as Optical Image Stabilization, 4K video and 5MP wide angle shooter on the front.

Priv has 18MP (f/2.2 aperture) phase – detect auto focus camera on the back with features such as Optical image stabilization and ability to shoot 4K video and 2MP f/2.8 sensor on the front.

Samsung Note series is already popular for it’s camera. Undoubtedly, this device has one of the best cameras present in any smartphone this year. With IOS and ability to shoot crispy 4K video, you can get great bright saturated shots with this device. Priv also has very nice camera which would give great performance to you.

Note 5 comes with 3000mAh battery and Priv has 3140mAh battery. Both devices deliver good performance and if you are an average user, you can definitely last your device for a day without charging it. Both devices support Fast charging for your urgent needs

These two devices have very high end specs on paper. However, in the software section, since BlackBerry adopted to Android for the first time, you may face some bugs here and there. It has no fingerprint sensor, instead, Priv has its own security mechanisms such as DTEK for Android by BlackBerry and Picture Password to protect your device. Both devices are priced nearly at $700 which is no less for many people.

Answering the question, “which one is better” is not straight forward. If you are a physical keyboard fan with some new features then you might actually like Priv. Note 5, on the other hand allows you to draw with a stylus and gives native Samsung experience.

Which one do you think is better? Do let us know in comments.