Ever since Lenovo acquired Motorola, it is providing a number of sensational looking modifications in the mobile world. Pursuing the launch of Moto G4, G4 Plus and G4 Play, Lenovo’s Motorola has proclaimed two new Android smartphones called Moto Z and Moto Z Force. In the US, it will be sold as Moto Z Droid and Moto Z Force Droid. However, the specifications would be same as the stock editions. The most intriguing thing among all the features of these two mobiles is Moto Mods, which is newly launched hardware equipment that will let you do something using the hardware. Anyway, if you are willing to know about Lenovo Moto Z, just read on. 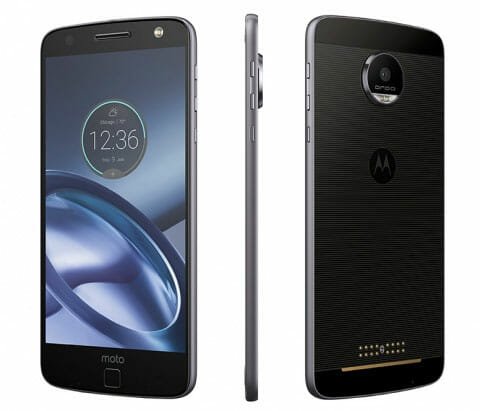 Like said before, the key feature of this mobile is Moto Mods, which will let you do something without using software and using hardware. Basically, this is going to be a modular mobile like Google’s Project Ara. The design of this mobile is pretty good. The front side has no major difference from previously launched mobiles. However, you can find a moto logo on the front side. The back panel looks really professional. According to Motorola, this is probably the slimmest mobile, which has a thickness of just 5.2mm. the whole dimension of this mobile is 153.3 x 75.3 x 5.2 mm. considering this, you can call it a small mobile. However, the weight of Moto Z is really less, which is only 136gms. However, the weight is calculated without the additional modules.

Talking about the display, it comes with massive 5.5-inch AMOLED capacitive touchscreen. This time, Motorola has ditched IPS display and opted for AMOLED display, which is generally being used by Samsung. Nonetheless, the screen resolution is 1440 x 2560 pixels, which is really huge. On the other hand, it is protected by Corning Gorilla Glass 4.

The performance of this mobile should be up to the mark as it comes with the latest version of Snapdragon chipset. In other words, you will get Qualcomm MSM8996 Snapdragon 820 SoC. There is a chance that it will come in two different variants and it should be distributed according to the region. However, you will get Dual-core 2.15 GHz Kryo or Dual-core Kryo processor clocked at 1.6Ghz. Both of them should do your job perfectly. Apart from that you will get Adreno 530 to power up the graphics.

The RAM is always an important element of any mobile. This time, you will get 4GB Ram along with 32GB or 64GB internal storage. The most surprising thing is you can extend your storage up to 2TB using microSD card.

Motorola doesn’t compromise with the camera and there are many people, who have bought Motorola mobiles because of a great camera. This time, you will get 13MP rear camera along, which includes ƒ/1.8 aperture, laser autofocus, zero shutter lag, quick capture, optical image stabilization, burst mode, night mode, HDR, panorama etc. The best part is you can record 4K video using this rear camera. Apart from that, 5MP front facing camera is also available in this mobile.

Motorola has opted for Type-C port from 3.5mm Jack and this is the reason, why Moto is claiming to be the slimmest phone maker. Some other useful features of this mobile is fingerprint sensor, TurboPower charging, low light camera, 2600mAh battery, NFC etc.

All these things will be sufficient for you to get the best experience out of it. This mobile will be released in September. Lenovo has not unveiled the price of this mobile, as of now.