Google Plus Gets A Fresh Coat Of Paint, Adds Cover Photos And More Enhancements

Google Plus, Google’s nascent social network which was launched a year ago, has received a fresh coat of paint yesterday. The social network, although nascent and new, has made quite a few noteworthy changes to its design which seems clearly inspired from its closest rival, Facebook.

Google Plus has added support for cover photos, a chat sidebar on the right, a better navigational panel on the left but the most annoying thing in my opinion, is the blank whitespace in the center. Maybe, Google will fill that space with customized widgets later on but as of now, I don’t like it because the content is cornered and there are a lot of distractions that takes the focus away. If there is one thing that Google Plus did better than Facebook, it was surely a clean design which was free from distractions and unnecessary UI clutter. Looks like Google wants to shove your stream with more content, widgets and apps in the coming days, which is why there is a blank column plastered in the center of your Google Plus stream. 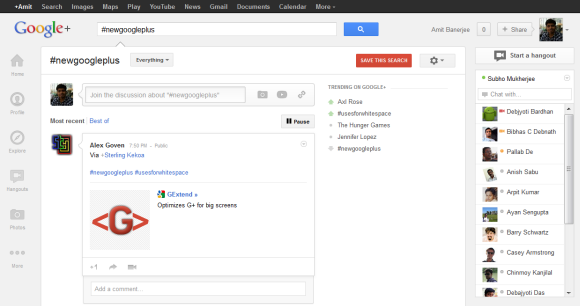 Cover Photos For Your Google Plus Profile

When Google Plus was launched on a field trial basis, Google used to show a row of photo thumbnails on your profile. It goes without saying that this was surely inspired from Facebook’s profile thumbnail feature, which was soon replaced by the much debated cover photos, some good examples can be seen here. 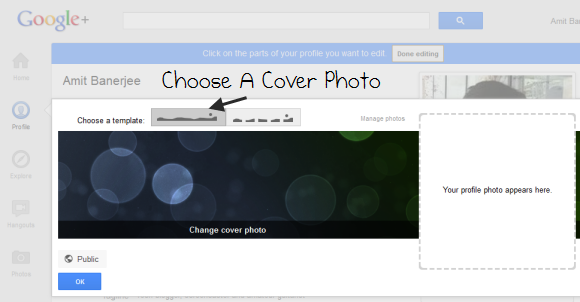 The size of Google Plus cover photos should be 960 X 179 px while the the new enhanced profile photo should be around 250 X 250px.

Here is my Google Plus profile with the photo row consisting of 5 photo thumbnails: 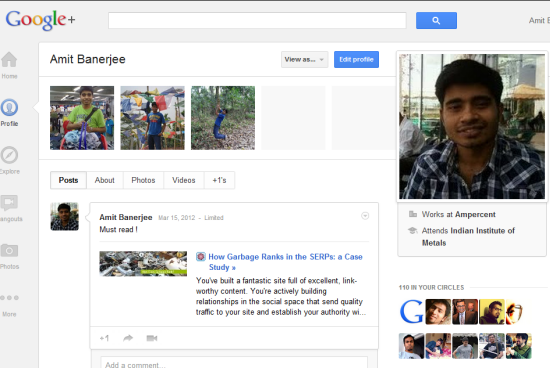 And here is how the new profile looks, once I uploaded a nice wide cover photo to my Google Plus profile:

Moving from cover photos to other cosmetic enhancements, Google Plus has redesigned the main navigational panel by moving it from top to the left side. The new navigation pane on the left can be customized, you can drag and drop to re-order the items as you want. There is also a separate page for hangouts which shows all the hangouts that are happening in your circles. This is a great way to participate in a hangout without having to find or filter them from your Google Plus stream. The “Explore” page on Google Plus is another nifty addition, which shows content that is popular among your Google Plus friends. Call it the equivalent of Facebook’s “Top Stories”.

Photos and video pages have been revamped too, Google Plus now shows bigger photos in full screen, just like Facebook does.

Get Rid of The Empty White space On Google Plus

If you are anything like me and don’t like the empty whitespace column in the middle of your Google Plus stream download this add-on for Firefox. This script will center the new design and remove the blank Whitespace from Google Plus, so the content will spread across the screen and you won’t see any whitespace on Google Plus. There is another extension named G+ extend which optimizes the display for large screens.

Note: Both these extensions offer nothing except style fixes and there is a high chance that the temporary fix will stop working once Google rolls out something to fill in the blank empty space. Until then, this should take care of the blank space and stretch your stream across the screen.